Reactoonz is the follow up title to the much loved Energoonz game by Play’N Go, but you’d be very much mistaken to write it off as just another unoriginal sequel slot.

You see, whilst Energoonz was a brilliant game, with a 5×5 grid and amusing aliens, Play’N Go have really uped the ante with this new release. Of course, thematically the slot is the same, but Reactoonz takes everything that was great about Energoonz and adds to it.

That means that players can expect a larger grid, more ways to win, more bonus features and a higher volatility, thus making those big wins all the more satisfactory. Don’t let those cute aliens deceive you — this is a breakneck slots that is sure to entertain!

Reactoonz is played on a 7×7 grid and wins are awarded when five or more matching symbols appear touching each other, either horizontally or vertically. The slot works much like Aloha! Cluster Pays and Emoji Planet by NetEnt, and it also benefits from cascading reels. This means that when you do create a winning cluster, the contributing symbols are removed and new symbols will drop in to fill the space. Consequently, you can pick up a whole bunch of wins from a single spin. 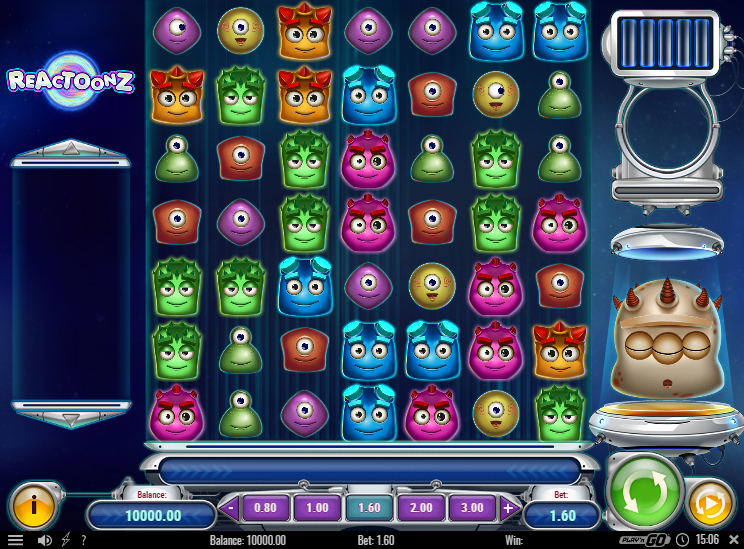 Symbols on the reels include various different aliens, all different shapes and all different colours. The alien to watch out for, however, is the pink fellow, who will award you with 750x your wager for a cluster of 15 or more symbols. The game also benefits from a wild symbol, which is represented by a vortex. This simply works like a traditional wild, substituting for all other symbols to help create winning clusters. 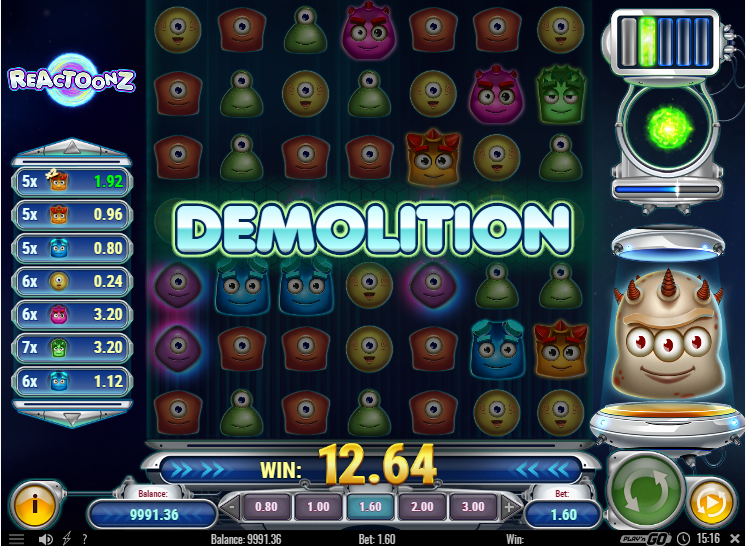 Reactoonz is playable for as little as 20p a spin, all the way up to £100. This means it should suit a whole range of budgets, but take note that this is a highly volatile game. You may spin for ages without a single win, and then all of a sudden clusters will come in thick and fast, boosting your bankroll significantly.

Reactoonz actually benefits from not one, not two, but a whopping seven bonus features! Normally, we’re dubious of slots that might promise too many bells and whistles. They often don’t pay out too well, on account of there being so many, and thus disrupt gameplay.

Luckily, however, the Reactoonz’s bonus features are all heavy-hitters. Each time you create a winning cluster, you’ll power up the Quantum Leap  meter by one. When the meter is fully charged, one of four bonus features will be triggered. 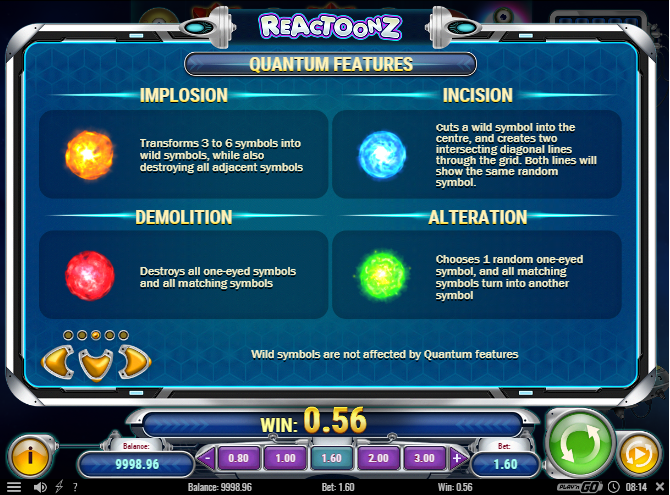 The Gargantoon sits to the side of the reels as you play and if you manage to fill the charge meter five times, he will be added to the reels. The Garagantoon is a 3×3 wild symbol to begin with and then on each cascade he will divide up. First to two 2×2 wilds, then to nine normal symbol sized wilds. 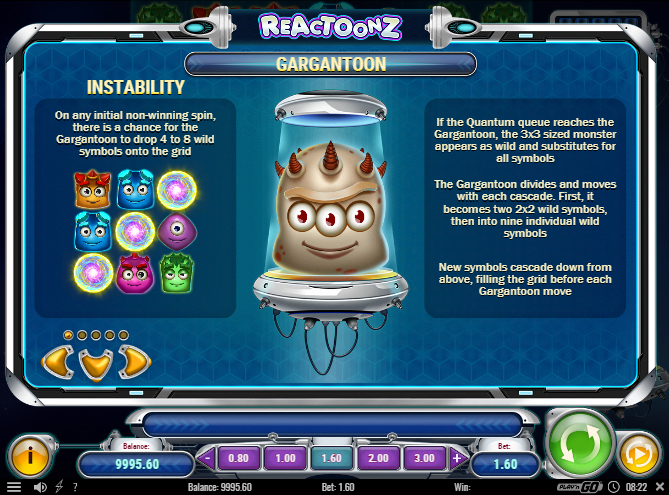 There are two other bonus features in Reactoonz and both are present within the base game. The first, ‘fluctuation’, means that on each spin, one symbol is chosen at random and if these are part of a winning combination they will leave behind two wilds in their place.

The second is the ‘instability’ feature. This feature can be triggered on any non-winning spin in the base game and it means that the Gargantoon will drop four to eight wilds onto the grid. 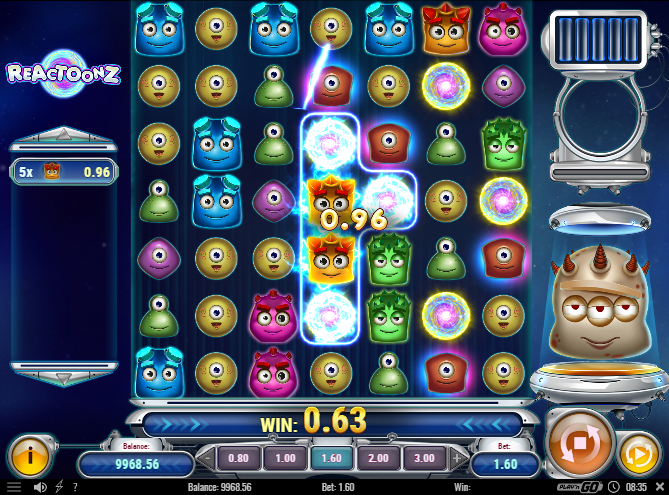 Reactoonz is a highly original slot, which is completed with amazing graphics. The alien symbols are bold and amusing, and the game looks flawless across all devices. We were a little worried that the 9×9 grid would appear too busy, when played on a smaller screen. Yet, Play’n Go have managed to make sure that you won’t feel like your missing out, no matter which device you play on. 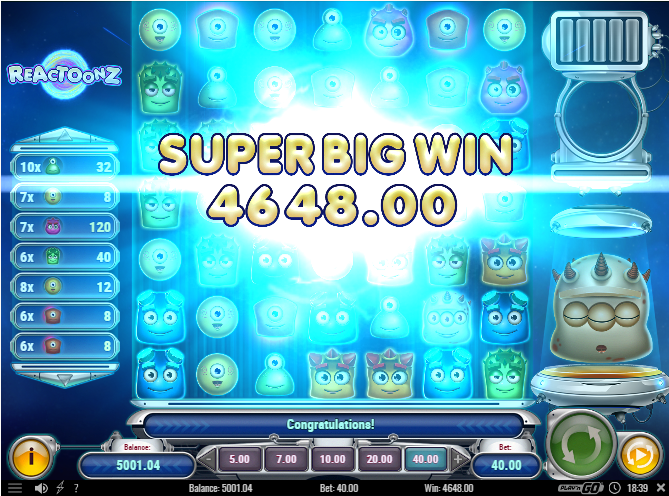 The bonus features each come with their own animation and we love that each win is celebrated by the Gargantoon. That being said, we did have to mute the game after only a couple of spins, because, whilst the music is fitting to the theme, we found it highly annoying!

Reactoonz may sound incredibly complicated, but by about your third spin, you’ll have got the hang of it. It’s a fast paced, fun slot which forgoes convention and instead delivers something highly original.

As we mentioned earlier, however, Reactoonz is a high variance game so don’t let those cute aliens lull you into a false sense of security. You could win up to 4,570 times your stake on every spin, but you could also play for a long time without seeing a single reward.