BGO Vegas Have 16 Games Consoles Up For Grabs This May!

Ace Kingdom Review — Plenty Of Choice For Everyone

NetEnt’s Neon Staxx is one of their most played titles. It launched way back in 2015 and features bright retro graphics and a plethora of lucrative bonus features. Imagine our excitement then, when we heard the news that the team would be releasing a brand new game called Butterfly Staxx next month.

On closer inspection, however, we found that the two slots actually share much less in common than their name suggests. Nevertheless, Butterfly Staxx looks to be a highly exciting and stylised game, boasting the sort of beautiful graphics NetEnt are famous for, free spins and more. The slot is set to launch on June 21st, but as we’ve had a sneak peek, you can read on now to find out more about what to expect.

Butterfly Staxx is a 5 reel slot with 40 fixed paylines. It’s playable from as little as 40p a spin (1p on each payline), up to £400. The slot will be launched on 21st June, and will be available on desktop, mobile and tablet devices.

Whilst this new title shares part of it’s name with NetEnt’s 2015 hit slot Neon Staxx, the only thing the two really have in common is bright and glowing graphics. However, whereas Neon Staxx took players back to the 80’s with a retro theme, Butterfly Staxx features tropical flowers, butterflies (naturally) and the traditional 9 to A playing card symbols. The game’s wild is the orange, purple and yellow flower and this substitutes for all other symbols in the game, apart from the scatter.

The slot boasts a great bonus feature in the base game called Butterfly Re-spins. Whenever a yellow butterfly lands on the reel, it will come alive and fly to the left hand side of the reels. The reels will then re-spin, with the yellow butterflies remaining in position. If another butterfly symbol lands on the reels during the re-spin, it will also fly left and join the others, and players will be treated to another re-spin too. The re-spins can carry on being triggered until no more new butterflies land on the reels. 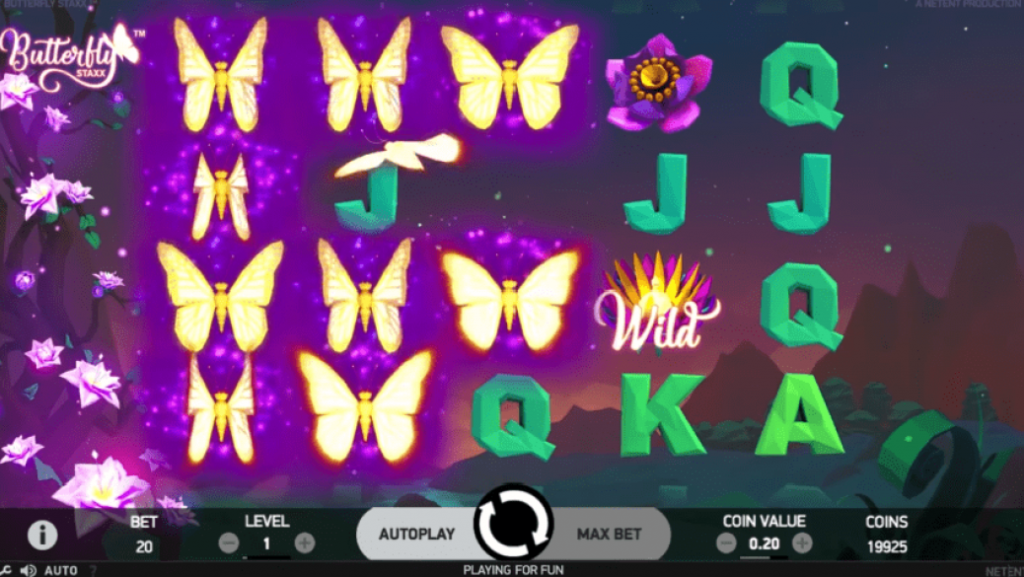 This new release will follow Copy Cats and Scruffy Duck, the two new games NetEnt are releasing for May. It’s been a busy year already for the team, and we’ve seen them really up their game in terms of innovation and design. However, when compared to some of their latest slot launches, Butterfly Staxx could be deemed a little disappointing.

Whilst we would disagree with this statement, it would be easy to understand why players may feel that way – the game is relatively simple and isn’t jam-packed with the sort of avant-garde bonus features NetEnt normally produce. Instead, Butterfly Staxx promises relaxed and soothing gameplay with, as a low variance slot, wins that come little and often. Not all slots have to be high-speed and dramatic and if you enjoy a more chilled out gaming experience, we’d definitely recommend giving this slot a spin when it’s released. 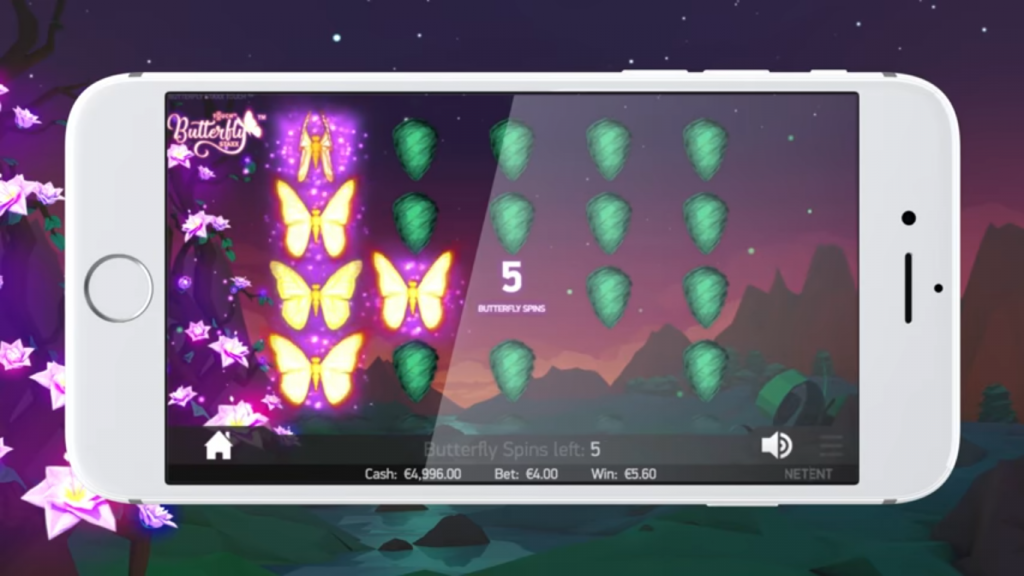 During the free spins round, the only symbols on the reels will be cocoons. These cocoons will either be dormant or active. Dormant cocoons will do nothing, whereas the active cocoons will give way to those beautiful butterfly symbols. These symbols will fly to the left of the reels and remain in place until the end of the bonus round, much like the re-spins feature in the base game. This gives players the potential of racking up a whole screen of butterfly symbols, which can create some massive wins.